The Port of Valleyfield is part of the city’s history and has contributed to the development of our beautiful region and its economy. It is a history strewn with obstacles: from the first canal dug by hand to the logistics hub for all the industrial complexes of the southwestern Montérégie region that it is today, the Port of Valleyfield has succeeded in surviving the passage of time and remaining efficient.

1899 – The Soulanges Canal (23.6-km long) replaces the Old Beauharnois Canal which has been deemed obsolete as a result of the industrial boom;

1932 – Opening of the new Beauharnois Canal (24.5-km long) and inauguration of the Beauharnois hydroelectric power plant;

1959 – Inauguration of the St. Lawrence Seaway;

1959 – Inauguration of the St. Lawrence Seaway;

1965 to 1968 – Creation of the Société du Port de Valleyfield, the first legally constituted autonomous entity with the responsibility of administering and developing the Port of Valleyfield and the only autonomous and self-managed municipal port in Canada;   The M/S Christine: the first ship to enter the Port of Valleyfield with a cargo of phosphate for Les Engrais du St-Laurent;   Construction of a 101,500 square foot warehouse for Canada Steamship Lines (warehouse D);

1978 to 1988 – First and second expansions: addition of a bulk terminal and an expansion, addition of approximately 500 meters of docks, construction of a 3,440 square foot warehouse;

1994 to 1996 – Stevedoring: Valport Maritime Services assumed management of port operations;   Construction of a warehouse to receive 20,000 tons of industrial salt;   McAsphalt Industries moves into the Port (handling and storage of liquid bitumen); 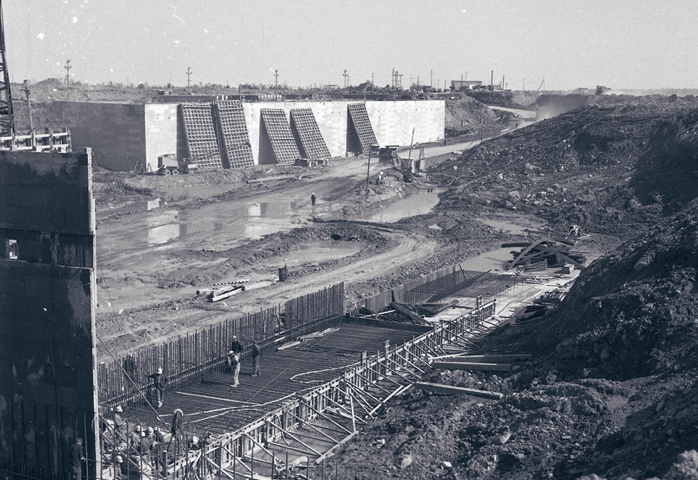 Salaberry-de-Valleyfield & the power of water

The region’s strong hydroelectric potential—thanks to the 80-foot drop between Lake St. Francis (Salaberry-de-Valleyfield) and Lake Saint-Louis (Beauharnois)—made the town a location of choice for energy-intensive industries.

The construction of the new Beauharnois Canal, abundance of water and electricity, availability of a skilled labour force, the city’s geostrategic position alongside the St. Lawrence Seaway and, of course, its port, continue to make Salaberry-de-Valleyfield an essential connection between Quebec, Ontario, and the U.S.

Map of the port zone